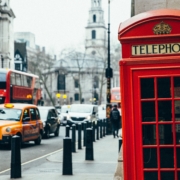 Independent News
A great display of leadership by London’s Mayor, Sadiq Khan. On Friday, the city announced that as of February 2019, the city of London (England) will ban junk food advertising across all public transportation network.